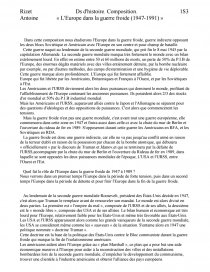 But the West will have to learn how to contain it, just as it once had to learn how to contain Soviet communism. Ideological enthusiasms like Marxism-Leninism will wax and wane, these writers are saying, but the Muslim adversary remains permanently in place. Far from representing the eccentric thoughts of a few commentators, such fears appear to touch a nerve deep in the Western psyche. More than half the respondents percent to be exact-believed that one or more of the Muslim states are most threatening to France. Similar opinions can be found in the other countries of Western Europe.

Some Muslims, the fundamentalists, encourage these fears. For one, they declare that the great conflict of this age is not that between the United States and the Soviet Union, or between capitalism and communism, but between the West and Islam. They see Russia as part of the West. Fundamentalists boast they will win this battle of titans.

The Islamic power will play a decisive role in this…. Ultimately Islam will become the supreme power. How should the West respond? While the question is too new to have received much attention, the main lines of a response can be discerned. For some, the key step lies in building cooperation between Western states.

On the mundane level, industrial democracies should band together and preserve the liberal traditions of freedom of speech, freedom of religion, and the like; and they should cooperate against terrorism and other acts of violence. More imaginative are those notions which would reach out to the Soviet Union-or, more accurately, the Christian portions of the Soviet Empire-as an ally against the Muslims.

As the three Slavic republics, the three Baltic republics, Moldavia, Georgia, and Armenia return to their historic allegiances, they can extend the population and geography of Europe. The most provocative notion has to do with building a military alliance with these peoples, and especially the Russians. Should the Russian empire in Central Asia threaten to collapse, a full-scale religious war fought with nuclear, chemical, and biological weapons is not impossible.

The Iraqis and Iranis have already proven themselves capable of it, and the desperate and frustrated Russians certainly possess the means. What is one to make of these ideas? To begin with, they are a great improvement over the supine policies that many Western states, especially European ones, have adopted in recent years.

Further, the fear of Islam has some basis in reality.


From the Battle of Ajnadayn in until the Suez crisis of , military hostility has always defined the crux of the Christian-Muslim relationship. In real life, Arabs or Turks represent the national villains throughout southern Europe. Europeans repeatedly won their statehood by expelling Muslim overlords, from the Spanish Reconquista beginning in the early eleventh century to the Albanian war of independence ending in Today, many Muslim governments dispose of large arsenals; the Iraqi military, for example, has more tanks than does the German and deploys the sort of missiles banned from Europe by the Intermediate Nuclear Force treaty.

Middle East states have turned terrorism into a tool of statecraft.


About a dozen Muslim states have chemical and biological war capabilities. Impressive capabilities to manufacture a wide range of materiel have been established in Egypt, Iraq, Iran, Pakistan, and Indonesia. Were it not for the Israeli strike of , Saddam Husayn would by now have his finger on a nuclear trigger. The strains of this prolonged failure have been enormous and the results terrible; Muslim countries host the most terrorists and the fewest democracies in the world.

Specifically, only Turkey and Pakistan are fully democratic, and in those two countries the system is very frail. As in the rest of the world, autocracy invites leaders to pursue their own interests. The result is endemic instability plus a great deal of aggression.

Muslims are not fanatical by nature, but are frustrated by their current predicament. Most of them wish less to destroy the West than to enjoy its benefits. For another, Muslims are not now politically unified and never will be so.

The Iraqi invasion of Kuwait made this obvious for the whole world to see, but many other examples come to mind. Lebanon and Syria are in the throes of working out conflicting nationalist claims, Syria and Iraq have divergent ideological programs, Iraq and Iran claim overlapping territories, while Iran and Saudi Arabia espouse contrasting religious visions. Arab unity seems always to fail, as do the other schemes politically to bind Muslims together.

The violence of the Middle East symptomizes these disagreements.

The Iraq-Iran war, a purely Muslim conflict, lasted a horrifying eight years consumed in its peak days as many lives as the Arab-Israeli conflict has over four decades. Today Muslims confront each other in Iraq and Saudi Arabia. Indeed, the record suggests that wars between Muslims are two or three times more common than those waged against infidels. Then too, there is the fact that more Muslim governments cooperate with the West than threaten it. Turkey is a member of NATO. Saudi Arabia and the other oil-rich states have invested so heavily in the West, their interests are directly tied up with it.

The picture is hardly one of uniform hostility.